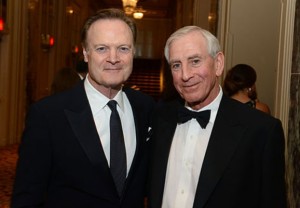 The Crash and Churn of Lawrence O’Donnell

MSNBC anchor Lawrence O’Donnell gave an exclusive interview to The Daily Beast’s Editor at Large, Lloyd Grove about how he survived a head-on car crash and how that event and the events afterwards changed his perspective in his day-to-day life.

He had a broken hip, fractured in several places as he was crushed against the driver’s seat. He had also suffered several knife-like flesh wounds on his legs. But if he positioned himself a certain way, he found he could avoid excruciating agony.

“I think I need an ambulance, too,” he told one of Tortola’s first responders, who explained that he’d have to wait till one of the other ambulances returned; there were only two available on the island. It would likely be a long wait because the accident had caused an island-wide traffic jam. So O’Donnell looked around for the iPhone he’d just been holding; it had flown out of his hands on impact. He had to get in touch with his colleagues at MSNBC.

Within a few minutes, he was texting with various MSNBC producers, and within the hour—even before the ambulance arrived—MSNBC President Phil Griffin and Griffin’s boss, Patricia Fili-Krushel, chairman of the NBC Universal News Group, were arranging for separate private jets to medevac O’Donnell and his brother back to the United States—Lawrence to New York and Michael to Boston—and had lined up Dr. David Helfet, a renowned orthopedic trauma surgeon at Manhattan’s Hospital for Special Surgery, to operate on Lawrence.