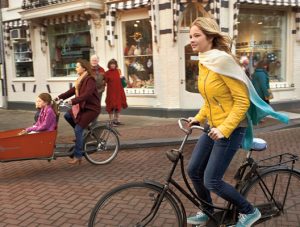 Maxime Heinsbroek is an 18-year-old university student in Amsterdam who has already gone through more than anyone should ever have to experience.

Even at her young age, Maxime has always had a passion for living life to the fullest. While on vacation with her family in France, Maxime was out one evening on her scooter when she had a terrible accident. To this day she doesn’t remember anything about the crash itself. She just remembers waking up in the hospital confused. It took her worried mother much of the next day to find her.

As it turned out, Maxime had shattered both her pelvis and one of her hips. The medical team who looked at her first x-rays were concerned she may never even walk normally again. Their family doctor in Amsterdam said that it was an extremely complicated repair that had to be done right the first time…there was one chance to do it right or do it wrong…and he referred them to Dr. David Helfet at Hospital for Special Surgery. Fortunately, he had trained under Dr. Helfet and provided the contact.

Maxime and her mother immediately flew to New York. Getting there was a tough experience, but once at HSS Maxime says that the care from everyone was phenomenal. The surgery went perfectly, and she has fond memories of people there who made her believe everything would be fine.

She followed the recovery plan and therapy to the letter, and just 60 days after her surgery, Maxime was back on her bike. By 82 days she was getting around normally with her friends, who had been scared they were going to lose her as part of their lives.

“I don’t ride my scooter anymore…I am scared of it. But I had to get back on my bike. Amsterdam is a city of bikes. That is how people get around here. If you can’t ride a bike in Amsterdam, you have no life.”

She says that Dr. Helfet truly is her hero. “I told him that he’s my hero. Without him, I would never have had the life I am living.”