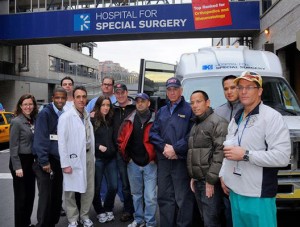 NY medical team arrives in Haiti on a borrowed wing

The volunteers, apparently the first group of New York physicians to arrive on a hospital-sponsored mission, mobilized quickly after the chief executive of Synthes, a medical device manufacturer, told Dr. Helfet the company would put its corporate jet and pilot at his disposal for the mercy mission.